Shark Rocket & Dyson V6 both are very popular upright stick vacuums. At a glance they look similar, but with a big price difference. Shark Rocket comes with a 30 feet cord while Dyson V6 is a cordless. In general we should not put them together. But I was torn between the two when I saw both of them in the Costco warehouse. Guess many shoppers might be also on the fence. I would like to share what I found for the two models currently sold in Costco warehouse. 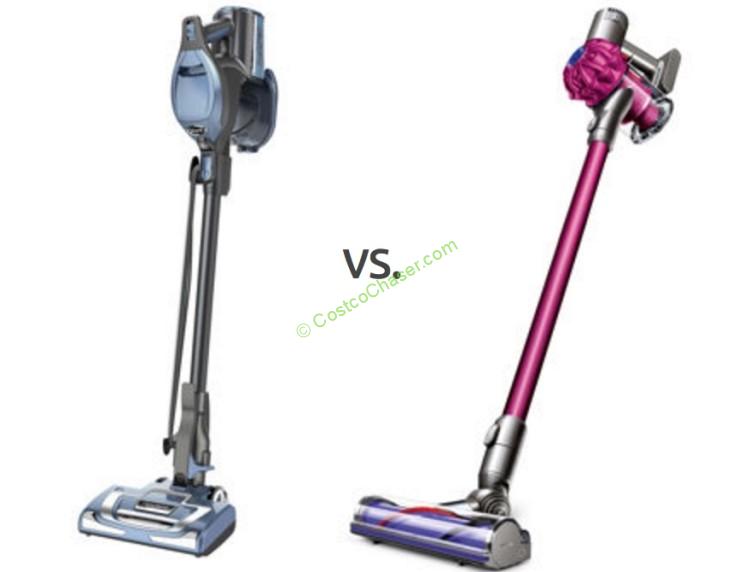 Shark Rocket almost doubles the weight of Dyson V6 Motorhead. Since most of the weight comes from the floor nozzle, you won’t feel so significant while maneuvering on the floor. For the ceiling task, Shark Rocket does feel much heavier with the nuisance of the cord. Practically, I would not use stick vacuum for full house ceiling task. Instead, Swiffer Dusters 360 Extendable Handle Starter Kit would be a better alternative.

Shark Rocket is much louder than the Dyson V6. If you’re sensitive to noise, you should stay away from it.

Dyson V6 motor fan blows air to your face which is kind of annoying, especially for people with dry eyes. Shark get this part right, the motor fan points away from your face.

The new Shark Rocket upright stick (UV450, HV320 series) has a 2x size dust bin, which earns double points for Shark Rocket. First, it obviously save you half of the trips to empty it. Second, it could be caused by the bin size, many Dyson V6 owners pointed out that empty the bin was not as easy as it was advertised since the dust clogged with hair often required you to shake it back and forth while the other hand had to hold the flip-down lid from swinging to block the way.

Although both works well on hard floor, some people pointed out the Shark Rocket did not suck up all the loose debris in one run especial when it moved backward. This was not reported on Dyson V6. It could be caused by the suction power or the nozzle design. Dyson V6 is decided winner on suction power.

Shark Rocket filter requires to be cleaned every month while Dyson V6 only need every three months. Many Shark Rocket owners claimed they actually have to clean it every other weeks. The manufacture only mentioned how easy to empty the dust bin. When the day comes to clean the filter, everyone would hate it, especially for the foam filter on Shark. Many owners found hair and debris on it which indicates the cyclonic filtration on Shark does not do a good job.

It depends on your cleaning habits, tasks and expectation. Although both manufactures try to convince you with one device for all the tasks, practically none of them does, neither others. Here we compiled a check list for your reference,

Both are very good lightweight upright stick vacuums, otherwise we wouldn’t spend much time to compare them. Dyson V6 receives high credits on suction power, quietness and portability. But the run time is a killer. Shark Rocket does live up to the price. Don’t expect one to cover all your tasks. Check what you need against the list above, hope it help you get off the fence.